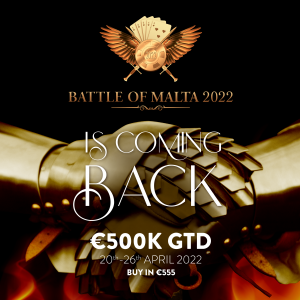 The Main Event for the April edition of Battle of Malta comes with a €500 + €55 buy-in and the festival will also feature a High Roller tournament, bounty tournaments, turbos, PLO and much more. Battle of Malta will be following all necessary Covid guidelines during the seven-day festival to ensure the event is risk-free fun for both players and staff.

Owing to the Covid-19 pandemic, the Battle of Malta was held online in both 2020 and 2021 in partnership with GGPoker. Both festivals were a huge success with massive guarantees and big turnouts. Rodrigo "Eureka!!" Selouan from Brazil bested a field of 8,789 entries to take down the online 2020 Main Event for $636,478. In 2021, New Zealand's "raggaz" topped a 6,591-entry online field to win the €3 million guarantee event for €378,285 with Polish superstar Dzmitry Urbanovich finishing third for €212,724.

The online Battle of Malta introduced the event to a worldwide audience and the festivals were widely covered by international and regional poker news sites and forums. Battle of Malta Event main organiser Casino Malta said: “Although it was disappointing that we couldn’t host live events here in Malta, it was thrilling to see so many people taking part in the online editions and we want to thank GG Poker for a really great collaboration. The success of the two online Battle of Malta festivals will give this year’s live events a real boost. Players from all over the world have now heard about the Battle of Malta and will want to see our beautiful Mediterranean island for themselves as well as enjoy the excitement of competing in a €500,000 million guarantee real-life event.”

The last live Battle of Malta, held in 2019, was won by Moldovan player Serghei Lisii for €247,167 after he cut a heads-up deal with Dutch pro and Malta resident Steven van Zadelhoff. The event broke records for the eighth year running with 4,657 entries and a €2,258,645 prize pool. There were more than 13,000 tournament entries overall during the festival.

Designed for low to mid-stakes poker players, Battle of Malta was first held in 2012 and has been one of the most popular stand-alone live poker events in Europe.

Dates for the October Battle of Malta will be announced later in the year.

Follow us for more info on Battle Of Malta