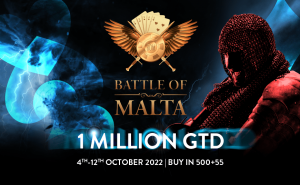 Casino Malta has released dates for a €1 million guarantee Battle of Malta which will take place at the luxurious InterContinental Conference Centre in St Julian’s in October this year.

The event follows the Spring edition of Battle of Malta which was a massive success back in April. It’s the first time that two Battle of Malta festivals have been held in one year.

The €1 million guarantee Main Event in October will cost just €500 + €55 to enter and will run from October 5 to October 12. There will be six start flights in total, including two turbo Day 1s. All those surviving Day 1 will make the money with Day 2 scheduled for October 9.

The festival will also feature numerous other tournaments including a High Roller, bounty tournaments, turbos, PLO and much more. October is a great time to visit Malta with excellent sunny weather, lovely beaches and a ton of tourist amenities. The Hotel InterContinental is Malta’s largest 5* hotel and is right in the heart of St Julian’s, one of the island’s top tourist resorts. St Julian’s lies within easy reach of Malta’s international airport as well as the country’s beautiful capital city of Valetta.

Casino Malta, which hosts Battle of Malta, said: “The turn-out for the Spring edition in April was truly fantastic but we are confident we will smash those numbers when the Battle of Malta returns this Autumn. In addition to the €1 million guarantee Main Event, there will also be a ton of side events as well as round-the-clock cash games at Casino Malta. St Julian’s is an ideal location for a poker festival with bars, cafes, restaurants and beaches right on the doorstep.

“Thanks to holding two events online in 2020 and 2021, players from all over the world have now heard of Battle of Malta and are thrilled that they can now come here to compete in person.”

Designed for low to mid-stakes poker players, Battle of Malta was first held in 2012 and has since become one of the most popular stand-alone live poker events in Europe.